Congenital bleeding disorders are characterised by impaired blood clotting, usually due to an inherited deficiency in or abnormal functioning of a clotting factor. There are many types (depending on which clotting factor is affected) but, with three exceptions, they are rare.

The most frequent bleeding disorders are haemophilia A, haemophilia B and von Willebrand disease [Srivastava et al, 2013; Laffan et al, 2011]

Most people with haemophilia are male but it can affect a girl whose father has the disorder and whose mother is a carrier. Females who are carriers can have levels of FVIII or FIX that are 50% or more below normal. The incidence of haemophilia is independent of ethnicity and geography.

Acquired haemophilia has a frequency of about 1.5 per million population. It is caused by autoantibodies that neutralise FVIII cofactor activity and is associated with older age, pregnancy and autoimmune disorders.

von Willebrand disease may cause a very mild bleeding disorder that in most cases is undiagnosed, therefore the prevalence is uncertain (but may lie in the range 0.6 – 1.3%) [Laffan et al, 2014; Leebeek and Eikenboom, 2016].

For those with bleeding disorders, prolonged bleeding occurs after surgery or trauma and is normally readily apparent. However, bleeding may also occur covertly and without apparent cause (‘spontaneously’). Bleeding into joints causes long term damage and pain.

In people with haemophilia:

The severity of bleeding episodes and the risk of spontaneous bleeding depend on the extent to which levels of clotting factor are reduced (or their function is impaired).

Bleeding may occur into one or more joints. The presence of iron in the joint adversely affects the maintenance of the synovium, causes loss of cartilage and provokes inflammation [Acharya, 2012]. With continued exposure, the joint becomes painful and loses movement; eventually, bone mineral density is lost. Haemarthroses affect the ankle, knee and elbow more often than the shoulder, wrist or hip (Srivastava et al, 2013].

In the child with severe hemophilia, the first haemarthrosis typically occurs when the child begins to crawl and walk: usually before 2 years of age, but occasionally later. If  inadequately treated, repeated bleeding will lead to progressive deterioration of the joints and muscles, severe loss of function due to loss of motion, muscle atrophy, pain, joint deformity, and contractures within the first one to two decades of life.

Clinically, bleeding into the joint causes local warmth or other abnormal sensation (which may be described as an ‘aura’), tenderness and discomfort on movement. This progresses to swelling, pain at rest and extreme loss of movement. In recognition of the risk of long-term complications, a joint affected by three or more spontaneous bleeds within a 6-month period is labelled a target joint [Srivastava, et al, 2103]

In severe haemophilia, the occurrence of joint bleeding increases with age and accounts for:

The frequency of joint bleeds was greater historically than is currently the case because earlier and more widespread use of prophylaxis has reduced bleeding episodes. A 2001 survey of people with moderate haemophilia found that 43% reported joint impairment and 24% needed orthopaedic aids but bleeding was much less frequent among individuals born after 1970 [den Uijl, et al, 2009].

Almost a quarter of people with VWD surveyed in the early 2000s said they had joint bleeds [van Galen et al, 2015], but over half of those with type 3 VWD were affected [Leebeek et al, 2016].

This usually occurs after trauma or a sudden stretch, causing blood to leak into a muscle; this may lead to significant blood loss [Srivastava et al, 2013; Rodriguez-Merchan 2008]. The immediate signs and symptoms are ache, pain on movement (stretching or contracting), tenderness on palpation and swelling; these may be less obvious when a deep muscle is affected. Accumulation of blood within the muscle compartment can cause a marked increase in pressure (compartment syndrome) that may be limb-threatening; this requires prompt decompression. Complications include contracture, re-bleeding, pseudotumour and permanent loss of function. There is no published evidence on the incidence of muscle bleeding in people with haemophilia or VWD.

Bruising, epistaxis, menorrhagia and bleeding from superficial wounds (e.g. after immunisation) are frequently the first signs of a bleeding disorder among children and young people with VWD [Sanders et al, 2015] and are common in carriers of haemophilia A [Paroskie et al, 2015]. Reliable statistics are lacking on the frequency of these relatively minor episodes among individuals with moderate or severe bleeding disorders.

All head injuries should be managed as if intracranial bleeding has occurred, requiring an immediate increase in factor level after trauma or when early signs develop. This is adjusted in light of investigations; a confirmed bleed requires maintenance of levels for 10 – 14 days and consideration of secondary prophylaxis for 3 – 6 months.

Haemophilia per sedoes not increase the risk of microbial infection and, following the experiences of the 1990s, the risk of transmitting human immunodeficiency virus (HIV), hepatitis C (HCV) and hepatitis B (HBV) through blood products to treat haemophilia has now been virtually eliminated (though risks remain for non-lipid enveloped viruses and prions). When virus-inactivated blood products are not available, every patient should be tested for HIV and HBV at least every 6 – 12 months and whenever clinically indicated. Subsequent management – diagnosis, counselling, treatment and monitoring – is the same as in people who do not have haemophilia. There are no contraindications to HIV therapies in people with haemophilia.

The introduction of a new generation of oral direct-acting antivirals (DAAs) has revolutionised the treatment of HCV infection in recent years, offering exceptionally high cure rates and freedom from treatment with interferon [Seifert et al, 2015]. The WFH guidelines recommend standard treatment for HCV, noting that coinfection of HCV genotype 1 and HIV predict a poorer response to treatment; when HCV cannot be eradicated, the patient should be monitored every 6 – 12 months for end stage liver disease. This advice predates the introduction of DAAs and may not represent what can be achieved clinically today. The DAAs are relatively expensive but have been recommended by NICE and the Scottish Medicines Consortium for use in the NHS.

Inhibitors make it difficult to manage bleeding. In people with haemophilia, they are associated with increased morbidity and disability and they increase the risk of death by a factor of 5 in people with non-severe haemophilia A and by 70% in those with a severe disorder [Peyvandi et al, 2016]. Perhaps contrary to expectations, recombinant factors are associated with a 2-fold higher risk of inhibitor development compared with factors derived from blood [Peyvandi et al, 2016; Collins et al, 2014].

In haemophilia, risk factors for developing an inhibitor are related to the patient and the treatment [Peyvandi et al, 2016].

The clinical impact of inhibitors depends on the blood level of the inhibitor (titre) and the patient’s anamnestic response:

The pattern of inhibitor development is different according to haemophilia severity.

Inhibitors pose a threat to the management of events such as bleeding into joints. Patients who are low responders may be treated with a much higher dose of the clotting factor. In an emergency, individuals with a low titre of a high responding inhibitor can successfully be treated until the anamnestic response occurs (3 – 5 days).

There are two strategies for treating bleeding in the presence of high titres of high-responding inhibitors in patients with haemophilia: bypassing agents and immune tolerance induction.

Immune tolerance can be induced by frequent exposure to a clotting factor. This involves administration of 50 – 200 IU/kg every 1 – 2 days for several months, achieving eradication of inhibitors in 60 – 70% of patients with severe haemophilia A [Peyvandi et al, 2016]. Success has been limited in patients with mild or moderate haemophilia A and in haemophilia B, especially inpatients at risk of anaphylaxis.

A further alternative is to switch to a different FVIII product, which may not be affected by inhibitors to the predecessor. Patients should be monitored for inhibitor development after switching.

Genetic basis of inheritance of the major bleeding disorders

Both haemophilia A and B are X-linked recessive disorders – that is, the gene mutation occurs only on the X chromosome [WFH, 2016]: 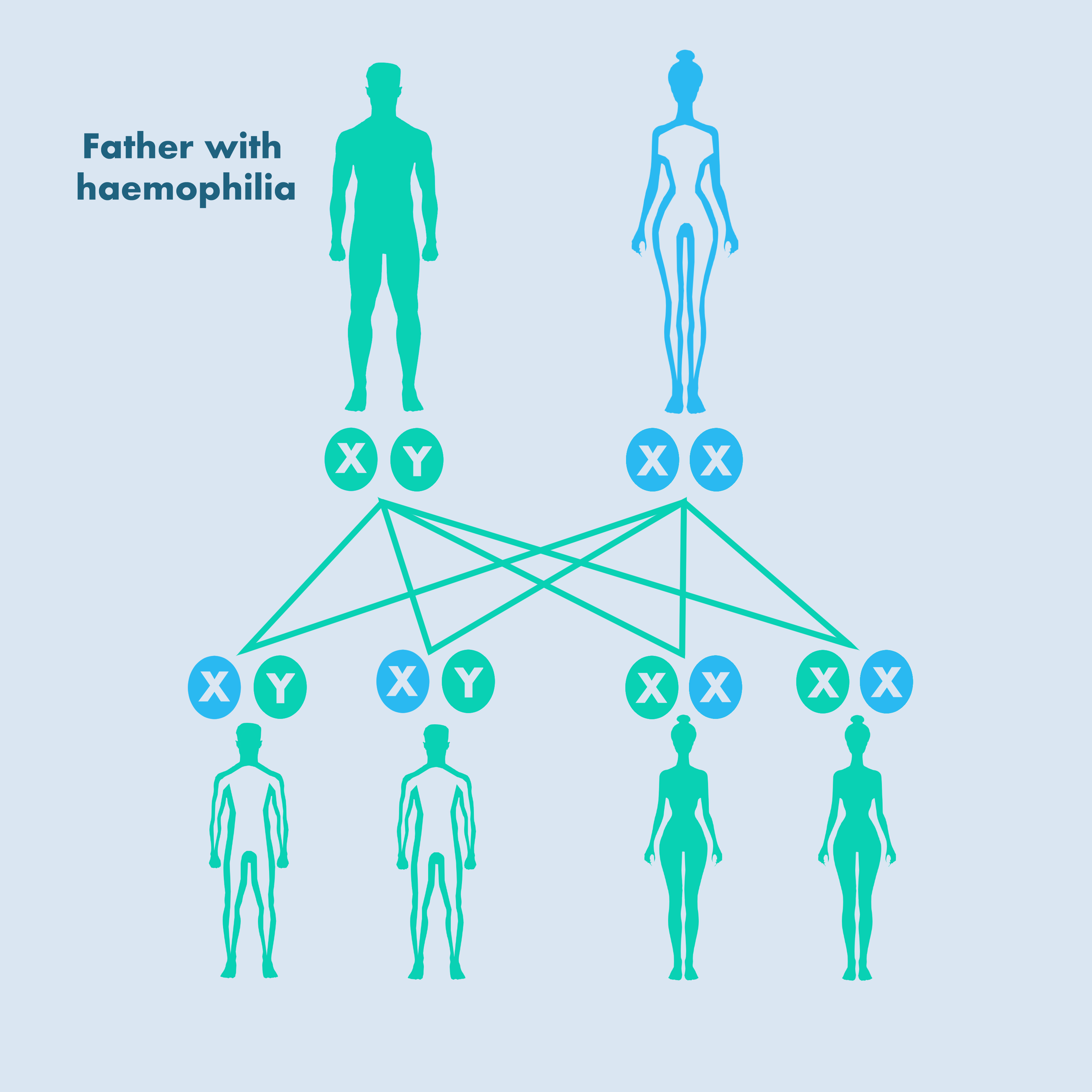 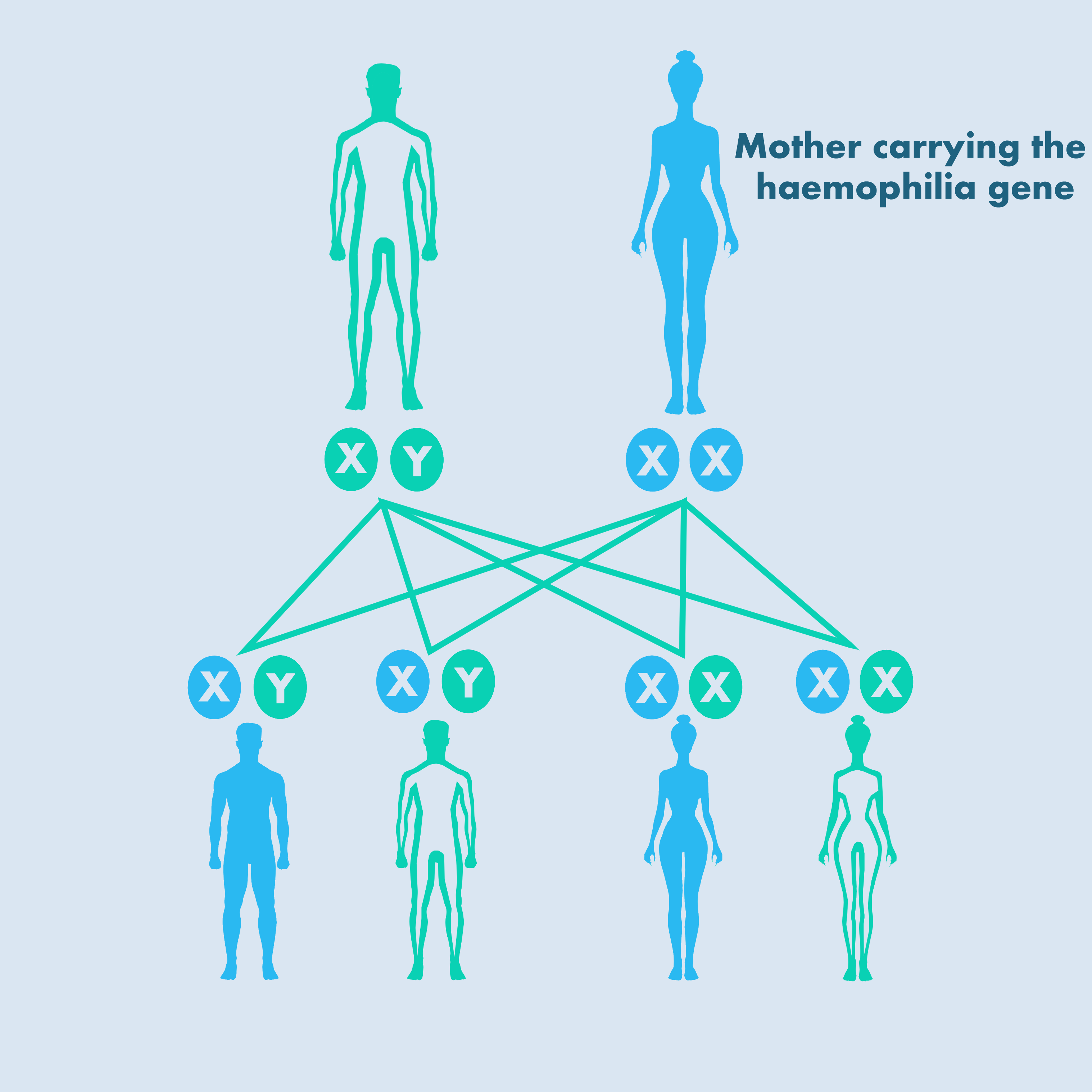 Von Willebrand disease has an autosomal inheritance pattern, meaning the affected gene is not on a sex-linked gene and men and women are equally affected. However, more women than men are diagnosed because they experience more clinical bleeding events (e.g. menorrhagia) [Leebeek and Eikenboom, 2016].

Subtype 2N and type 3 VWD have an autosomal recessive inheritance pattern, meaning a child has to inherit an abnormal gene (‘r’ in the figure) from both parents to develop VWD; if they inherit one abnormal gene, they are a carrier. 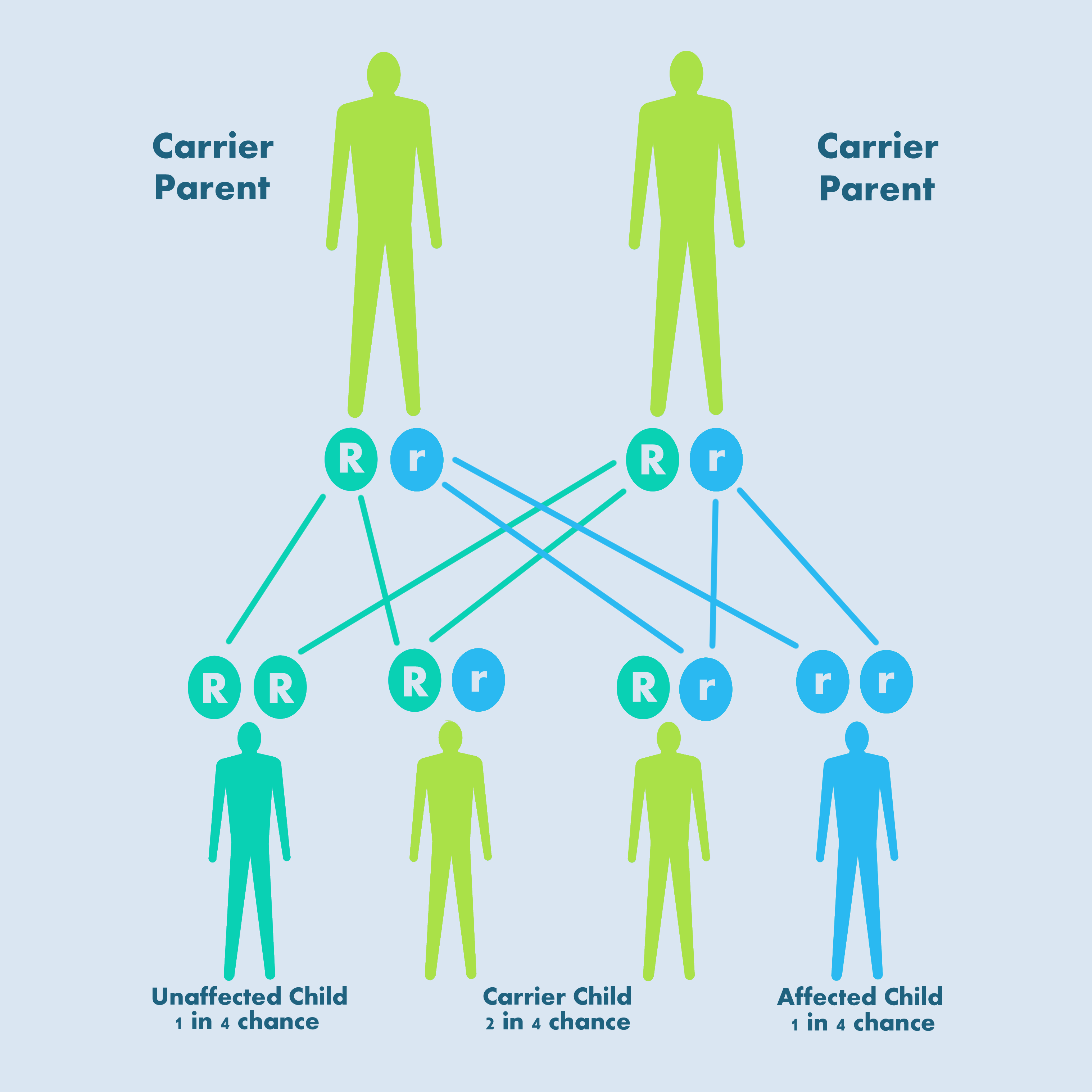 The bleeding tendency in mild haemophilia may not be known until the person undergoes surgery or is subject to trauma but even a severe bleeding disorder may not be recognised in a child until they begin to walk.

The diagnosis of a bleeding disorder requires clinical assessment supported by accurate laboratory measures. This has two implications:

Clinicians should adhere to local procedures for venesampling. Standards for collection and processing of biological samples are provided by the WFH.

Typically, a patient will be screened using routine tests before having an assay to determine clotting factor activity. The interpretation of these tests is summarised in the table.

* Results are highly dependent on the laboratory method used; ** The same pattern can occur in the presence of FXI, FXII, prekallikrein or high molecular weight kininogen deficiencies

A clotting factor assay will be carried out to determine the diagnosis and to monitor treatment. Tests using pooled normal plasma (PNP) are used to determine whether prolonged coagulation times are due to factor deficiency or circulating anticoagulants of inhibitors. A prolonged APTT that is not fully corrected by mixing the patient’s plasma with PNP suggests the presence of an inhibitor.Confirmation requires a specific inhibitor assay.

Peyvandi F, Garagiola I, Young G et al. The past and future of haemophilia: diagnosis, treatments, and its complications. Lancet 2016;388:187-97.

The Haemophilia Society. Living with the legacy of treatment. (http://www.haemophilia.org.uk/bleeding_disorders/information/living_with_legacy_treatment/living_with_the_legacy_of_treatment_landing_page; accessed January 2017)

World Federation of Hemophilia. How do you get hemophilia? September 2016. (www.wfh.org/en/page.aspx?pid=644; accessed January 2017)