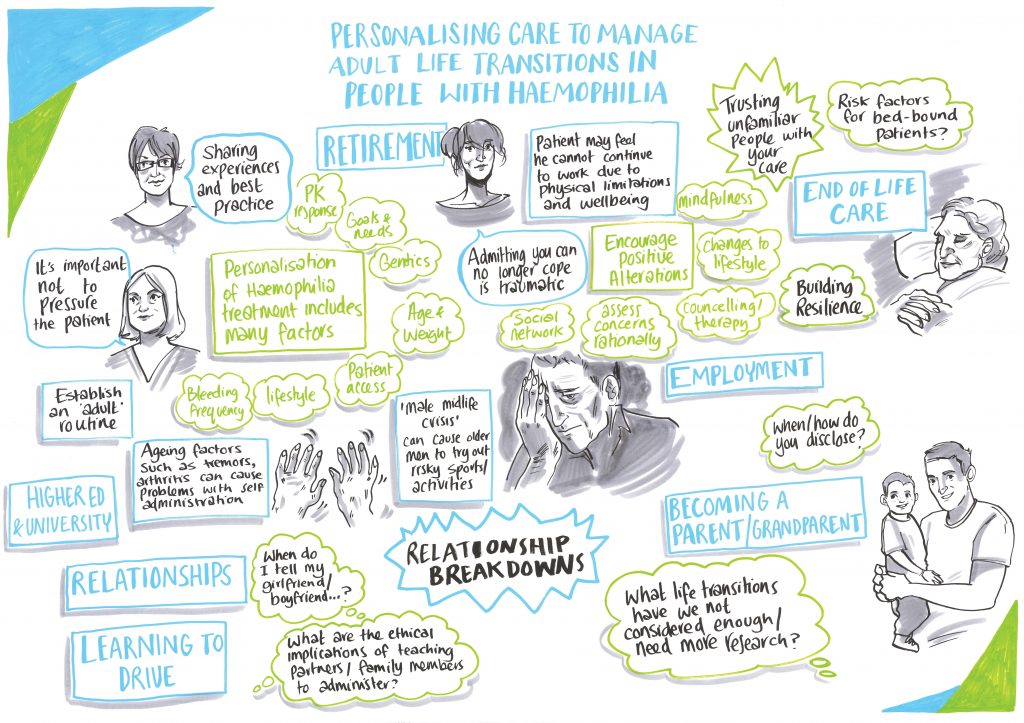 When caring for patients with lifelong chronic diseases we have traditionally used the term ‘transition’ to refer to the period of time when children and adolescents move into adult care. It has long been recognised that this is a time that that can be difficult for patients and families where there are significant personal, social, psychological, financial and emotional changes happening as well as a change in healthcare provision. In a workshop at the 2019 HNA meeting in Birmingham, we examined the other ‘transitions’ that occur in patients’ lives, which in turn can impact on their haemophilia care.

The attendees included paediatric nurses, which surprised the facilitators as we had assumed that they would not be interested in adult transitions, but they felt this was useful for them to be able to support children and families into adulthood.

We introduced the session by discussing a life timeline and where we, as the facilitators thought there might be transition issues. This was helped by the facilitators using case studies from their own experiences as examples which encouraged the attendees to share their experiences.

The facilitators also encouraged attendees to think about life transitions that we may have missed. Some of those included:

The list was endless, and what we as a group recognised was that life is one continuous transition from one state to the next. Sometimes those are planned for and even looked forward to (for example, marriage or retirement), while at other times they can be a sudden and not necessarily planned or pleasant change (such as redundancy or ill health).

As specialist healthcare providers the group recognised that they already support patients through these transitions although they rarely thought of these changes as transitions.

As a group we were keen to examine these life changes in more detail and to really try and get a sense of what patients and their families need from us when facing these issues. As a starting point we felt that it would be beneficial to look at how we enable prophylaxis for patients who are no longer able to self-treat. We recognised that we spend a lot of time supporting boys and families to become independent into adulthood but we don’t always have the tools at our disposal to support them when they are no longer able to self-treat. Several members of the group asked to be involved in a working party that would look at ways of addressing these issues. This is a project that we are now keen to move forward, so if anybody is interested in joining us get in touch through Haemnet and we’ll see what we can do.

The group as a whole felt that there was a lot more to discuss and define in life transitions than we had time for, and that there was an as yet unexplored aspect of care that has the potential to improve quality of life outcomes for patients if we are more able to understand what is needed to support patients.