Where is Gene Therapy?

Haemophilia nurses are increasingly being asked about gene therapy so this overview of the science and evidence from clinical trials was a valuable update for HNA members.

Mike Laffan (Professor of Haemostasis and Thrombosis, Imperial College, London) began with a straightforward explanation of the principles involved in substituting a mutated gene with a working copy and using a viral vector to introduce it to cells where it can replicate. There are several approaches: introduce the gene into the cell where it functions within a separate body (an episome); replace the mutated gene within the chromosome; and edit the mutated gene to correct the defect. The first option is the one currently undergoing clinical trials and will correct the defect in the individual but not in his offspring. The others are still experimental and offer the prospect of permanently correcting the mutation in the individual and his children but carry the risks associated with irreversibly altering DNA (such as oncogenesis).

Haemophilia is a good candidate for gene therapy. It is caused by loss of expression of a single gene; when this is corrected, a relatively low level of gene expression will reduce its severity. Further, the gene can be placed in different cell types (currently it is hepatocytes) and its effects are easily monitored. Finally, the genes implicated in haemophilia A and B are large but not so large that they cannot be incorporated into a viral vector. 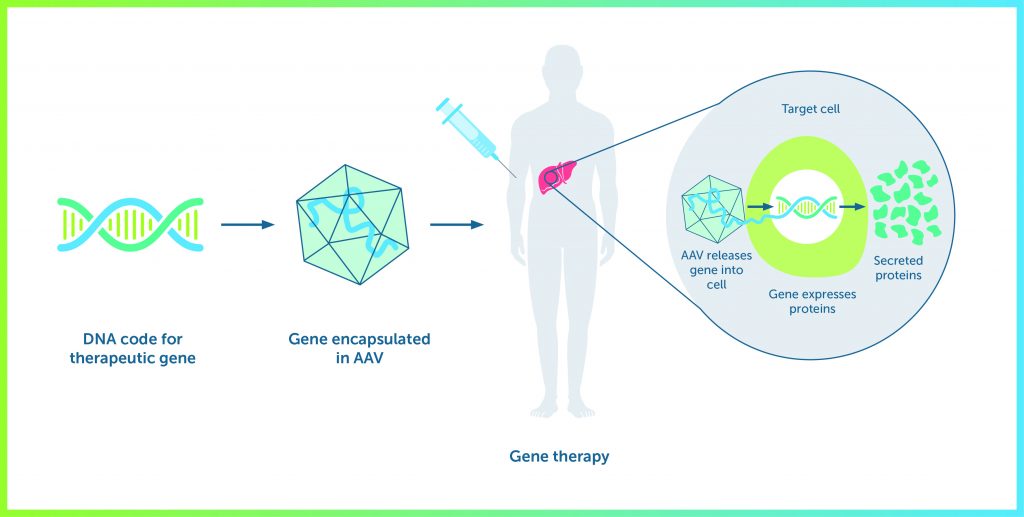 Gene therapy had a troubled beginning. The first clinical trial was carried out in 1990 in children with immunodeficiency (Science 1995;270:475-80) but had limited success. In 1999, a patient died after developing an immune response to an adenoviral vector following regulatory failings in the conduct of the trial. In 1999, a trial in patients with severe combined immunodeficiency caused leukaemia in half of recipients; this was subsequently found to be the result of the gene binding upstream of an oncogene and the selection of other gene mutations (J Clin Invest 2008;118:3143-50). These studies demonstrated the potential risks and need for heightened vigilance with this unfamiliar technology.

Early trials of gene therapy for haemophilia A and B met with little success, notably the short duration of response after introducing the gene into liver cells. This was due to failure to express sufficient factor and the immune response to the viral vector. Several viral vectors were tested, leading to the selection of an adenovirus-associated vector (AAV8) for which the prevalence of immunity in the population is low. AAV8 typically causes a transient immune reaction after 3 – 4 weeks that can be suppressed by a short course of prednisolone.

It had now been shown that stable activity of factor IX could be maintained for several years but expression was low – of the order of 2% – 11%. However, this could be increased by incorporating a naturally-occurring gene mutation known as the Padua variant, which is eight times more active than the normal gene. Individuals with this gene variant produce so much factor IX that they are at risk of thrombosis. When added to gene therapy, it raised factor IX expression to 10% – 60% after one year.

Gene therapy for haemophilia A developed more slowly. The protein is larger than factor IX,  more difficult to incorporate in a viral vector and it is more immunogenic. The technological challenges have largely been overcome and it has now been shown that factor VIII expression can be maintained, on average, within the normal range for up to one year (N Engl J Med 2017;377:2519-30). This is associated with almost complete discontinuation of factor replacement therapy. Experiments in animals have shown that factor VIII gene therapy can abolish inhibitors.

Some issues remain unresolved. Other viral vectors are needed so that gene therapy can be offered to individuals with antibodies to AAV (some are under investigation). It is still not clear how long factor expression continues: the episomes containing the genes are not replicated when liver cells divide, so there is a constant process of dilution over time. Current approaches are therefore unsuitable for children but, though gene editing would offer a permanent solution, the risks are not known. So far, clinical trials have excluded children and patients with inhibitors. Gene therapy is given as a single dose and it is not known whether this can be repeated. The risk of malignancy and the possible effect on other aspects of gene activity are not fully understood.

Three Phase III trials and four Phase I/II trials of different gene therapies for haemophilia are currently under way. Mike Laffan speculated that gene therapy could soon be a realistic option for many people, with the first product reaching the market within 3 – 4 years. However, gene therapy is expensive and it is unclear how it will be funded.